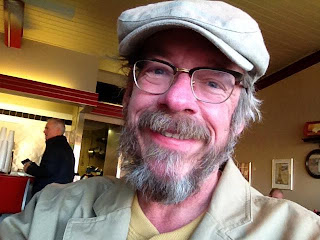 This is how I look today. I snapped this while waiting for breakfast at the local diner.

I try to keep a pleasant countenance. But I look in the mirror, and it seems as if I've aged 10 years in 10 months.

I weigh about 208 now, and am gaining weight, which is what the doctor wants.
Posted by mcarp at 6:31 PM 12 comments:

When my cat, M. Gaston, was still a kitten, my Basset hound, Bailey, adopted him as her own. She would gently pick him up in her mouth and carry him like a puppy; when he would try to wander off, she would get in front of him, bark urgently, and herd him back to a spot where she could keep her eye on him.

The Tao is a river wide as the universe, and as small as a tear trickling down your cheek. The millions of galaxies cannot fill it, but it will fit in the palm of your hand.

It was right in front of me all along, but it took me 55 years to discover it.

The CT scan from Nov. 16 shows that my tumors have not shrunk further, and may have in fact grown about a millimeter. My oncologist says this is within the margin of error for a CT scan and may be indicative of nothing.

We changed my chemo treatment two sessions back because of neuropathy (numbness) in my left hand and tongue. This may be permanent or it may clear up in a few months.

The news could certainly have been better.

On the good side, my liver function and red cell count remain completely normal. My doctor reiterated that going by lab tests, it appears I have no cancer, and that I'm not getting any chemo. He even went so far as to double-check with the lab to make sure they're been giving me the right stuff. They are.

I have had sixteen chemo cycles now.
Posted by mcarp at 6:25 PM 3 comments:

They've changed my chemo medication. The active ingredient is still 5FU, but some of the other stuff is different. Short version: more nausea, less of other side effects.

I've lost a significant amount of feeling in my left hand. This was caused by my previous chemotherapy cocktail. I also have some numbness in my tongue and my right hand. The doctor says this may clear up, or it may not.

I had a CT scan today – my third (I think) since being diagnosed with cancer. I'll find out the results a week from Monday.
Posted by mcarp at 5:02 PM 1 comment:

It's been roughly six weeks since my last blog post. I have now done 14 chemo cycles. Some long term side effects are now manifesting themselves. Back in September, I mentioned occasional tingling in my fingertips. The tips of some of my fingers, as well as the tip of my tongue, are growing numb. This may or may not clear up next spring or summer.

I had to skip chemo this week. My white cell count had dropped too low to safely receive treatment. This is the second time it's happened, and that's pretty damn good after 14 cycles. I know people who had it happen on the first cycle. Frankly, I'm grateful for the extra week off. I almost called the hospital Monday and told them that mentally, I just wasn't up to it. But I decided to fgo ion anyway, and my white blood cells got me the vacation I needed.

I took a spill in a restaurant parking lot the other day. One of knees just buckled as I was walking. I fell and landed hard on the knee that gave way. I've got a huge scab on it, but no swelling or other evidence of damage.

I've had this situation with my knees buckling for a while now. I sometimes walk with a cane to help catch myself if one knee or the other suddenly folds. I didn't have it with me when I fell in the parking lot.

My oncologist's assistant has suggested I may need physical therapy to strengthen my knees. They make machines that do that. I used to use one when I was doing weights (about 110 years ago).

My weight is fluctuating between 203 and 206 these days – downtown from a pre-surgery weight of about 240 and an all-time high of about 260. But there's quite a bit of flab here; I'm not in danger of wasting away just yet.
Posted by mcarp at 11:27 AM No comments: 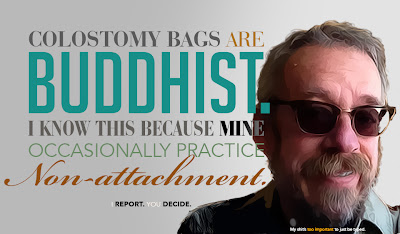 One of the things I've discovered about being a cancer patient is that it becomes your identity: mcarp, cancer patient. When you're in chemo, chemo is the dominant factor in your life. Everything else revolves around it.

I mentioned in yesterday's post that I sometimes go for days without bathing. Part of the reason for this is that the mere act of taking a shower is so physically draining I have to sit or lie down for twenty minutes afterward. Anything that involves more than two or three minutes of activity is going to require a rest period afterward.

I've had a bit of normalcy during my three-week 'chemo vacation', but only a bit.

As I've mentioned before, I take chemo on alternating Mondays, with a portable pump that continues to drip 5FU into my system for 48 hours afterward. Then I remain sick with various side effects for days.

When I first started chemo, I got five 'good days' between my every-other-week fill-ups. Then it dropped to four days, then three. Now I have no good days. I remain nauseated the whole time. Sensitive to cold the whole time. Fatigued the whole time. Having intermittent tingling of the fingers and toes the whole time. (The tingling is the part that seems to most concern my oncologist; the chemo I'm receiving can cause permanent numbness and nerve damage in the extremities.)

I was pretty much a slob before I got sick. Now, I'm even worse. But I don't have the energy to be otherwise.
Posted by mcarp at 8:35 AM 3 comments:

I'm past due for another update.

I have completed 11 of 12 scheduled chemotherapy cycles. The doctor had to delay the twelfth because my immune system is finally so shot I can't handle another dose. I've taken three weeks off from chemo, and I'll go back in next Monday to see if I'm in good enough shape to resume. If so, they'll hook me up for the twelfth dose then.

I had a third CT scan at the end of July. Good news: the chemo is working. I'm a little confused by what the oncologist told me, but either one or two of the tumors on my liver have disappeared. The largest one has shrunk significantly, and another has shrunk as well.

Here's where I'm confused. The first scan revealed three tumors, and the second confirmed that. The third scan shows either one or two tumors, and I didn't get the inconsistency until after I left the doctor's office. In any event, I'm making progress against a disease that at this point in my treatment has already killed about a third of the people who get it.

Again, complete recovery from Stage IV colon cancer is almost unheard of. It's a fraction of a percent of all cases. I'm not expecting complete recovery, only to buy as much time as I can get for myself before it kills me. That could be years from now, and I hope it is.

But in other respects, things are not going well. Even I can see the deterioration in my mental and emotional state. I spend day after day holed up in my house, seeing nobody. I sleep in the clothes I wear. I sometimes go for days without bathing.

If you've seen The Lazy Song alternate video by Bruno Mars — the one featuring Leonard Nimoy — it's quite similar to the way I live my life. Except for the bathrobe.

The house looks as bad as it's ever looked. In some respects, it's worse. There are styrofoam cups from Braum's everywhere. I've been living on milk shakes for weeks now, because they're one of the few things that still have any taste. Of course, foam beverage cups are huge space consumers, in or out of the trash can. And they're everywhere in here.

Before I learned that my tumors were vanishing, I had been psychologically preparing myself for imminent death. I knew I would make it through the end of the year, and probably next year as well. But after that, things seemed bleak, and I was training myself to not care. And it was working.

The house is full of fruit flies, by the way. They're everywhere.
Posted by mcarp at 5:48 PM No comments:

Guess it's time for an update. I have completed nine chemotherapy sessions. They warned me the effects would be cumulative, and indeed they are.

I think I have mentioned this before, but my chemo session every other Monday involves about three hours in the infusion center. They load me up with close to a half gallon of various IV drugs. Then they attach a portable pump to me, which drips 5FU into my system for 48 hours. And when that's over, I'm completely hammered. I can't drive. In fact, at this point, I can barely walk when the 5FU is done. It gets worse every session. But I have to go back to the hospital to have the pump disconnected. I thought I was going to need a wheelchair last Wednesday. I made it out of the hospital under my own power, but just barely.

Nausea is still a problem. I've been through a couple of different medications. They all work a little, but nothing is completely effective. So I throw up a lot. At least it gets me out of bed.

Chemo is going to cost in the mid-six figures. Insurance will cover almost all of that, but it looks like my co-pay for each sessions is going to be about $600, which means the whole thing will cost me about $7200 out of pocket. My total out-of-pocket expenses are going to be in the range of $40,000 - $50,000. I've already paid most of that.

Do not try to send me money. I don't need it. I can cover this myself, and I'm very grateful I can. But these dollar figures should give you some idea, if you don't already know, how a catastrophic illness can destroy a family financially.
Posted by mcarp at 11:02 AM 5 comments:

mcarp
I am a sentient being living in the central/southwest U.S.